First, my apologies for delaying my final entry from the Africa adventure – but the truth is – not only was I distracted by all things “return”, but I was pretty sick for several days, then the MPHS shootings took place and a lot of my resources were re-directed because of that. Thanks to all of you who have been praying for our family and our town. Robyn is well, and is rapidly processing her experience as an MPHS student in her normal, heroic and admirable way…

Sunday morning dawned as cramps and nausea faded, team members began to stir and my spirits improved. With Sam now on official business in China, Dave, Becky, and two other team members already back in Lilongwe, it was down to the rest of us to decide what to do with our last full day in Malawi. The original plan had been to do some work in the gardens around Gusu. Dennis and the rest of the full-time team had made preparations for us, our comrade was rapidly recovering (and out of reach anyway) and so even though we were short-handed, it seemed like the most sensible thing to carry on with the program. 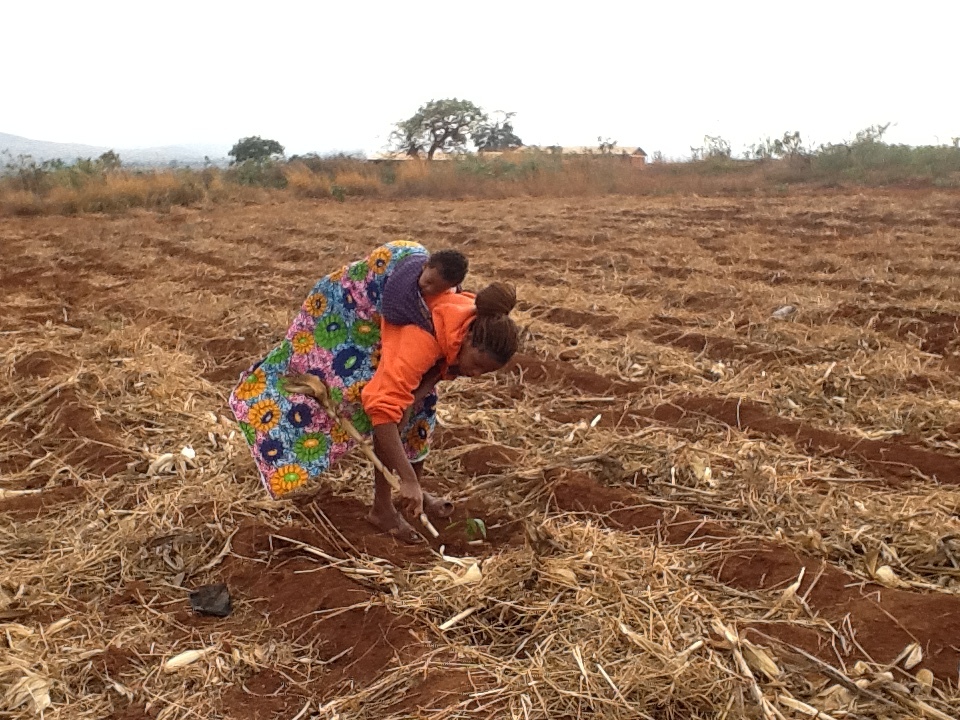 Dennis was able to introduce the remaining members of the team who had not already been, to some of the finer points of permaculture. We were then guided out to one of the newer sections of the site and we spent an hour or so planting mango tree seedlings. These trees will not only provide delicious fruit in about three years, they will provide shade for other crops, habitat for birds and insects, water storage and last but not least…beauty. We also put the finishing touches on the hog enclosure and enjoyed watching the 3 swine root around in the open air.

It was a lot of fun to get our hands in the soil, to do a job with a “beginning”, an “end” and a measurable result; to contemplate the long term impact of what we were doing (picturing a mature food-forest in this place within 10 years!). For me – this felt like a release. There is something about physical work outdoors that purges the soul of anxiety and regret. It is a tonic.

I was feeling almost normal by the time we got everything packed up and Suzio returned with the bus to take us back to Lilongwe. The evening before departure was about as you’d expect: a flurry of activity surrounding laundry, exchanging currency, getting trinkets shoved into suitcases (like we’re about to re-enact the opening scenes of “Midnight Express”) and saying our goodbyes to those whom we would be leaving.

Monday morning brought the unpleasant news that yet ANOTHER team mate went down hard over night: vomiting, diarrhea – AND a fever. Now, while the facts were, at the time, we were farther away from an active Ebola case than our families in Seattle were, the perception as reported in the media was, anyone coming from ANYWHERE in Africa who so much as had a “scary burp” and broke a sweat would be instantly tackled by big men in Tyvec suits and forced to gargle Clorox for 21 days…so

…after some extensive discussion, our team mate decided that to stay in Lilongwe an extra two days under Mala’s expert care until her symptoms subsided, was much preferred to enduring 21 days of quarantine in Addis Ababa after someone from the airline panicked and wouldn’t let her board the flight to the States from there.

So she stayed in Lilongwe.

We prayed, and cried a little as we said goodbye. (Up-date…yes, she made it home safe and healthy 3 days after the rest of the team)

The travel home was long and tedious, but uneventful. We got to fly a 787 Dreamliner on the long leg from Addis Ababa to Washington D.C. –  nice work, Boeing.

To be home was surreal. The now familiar weariness and nausea were overshadowed by two days of simple exhaustion and deep, merciful sleep. Fall had arrived while we were gone. It felt like walking into a complicated movie right in the middle: “What’s going ON here?! When did everything turn brown and cold?” I missed it…

…all of that having been said…it was so good to be home.

There is something about a man and his own little spot on the globe.

I comically wonder if, like old-timey-para-troopers, we are just dropped onto the surface of the planet with only limited hope of getting near the place we were destined for; you might end up in a tree, or in a lake, on top of a building or in the middle of a road…then you have to find your way through all kinds of hardship and unknown terrain, trial and error, doubt and failure to find where you were meant to land. But then there are a few of us lucky ones who actually landed right where we were supposed to.

I know people who have left Western Washington after a few, or even scores of years only to find that they had been pinning for the “desert” or the “big cities of the East” their entire lives…and they only just found out THAT’S where they belong. I know people who left the Mid-West plains or the slums of Mexico only to discover that right here on the shores of Puget Sound was where they were meant to be.

As for me, I can now say three things about my own placement: