Since making an effort to eat better over the last 18 months, trips to the grocery store tend to leave me…perplexed; maybe even a little anxious. Putting all programs, book titles and elaborate philosophies aside, I’m trying to eat actual food these days. I can’t remember who to credit with the two rules of thumb I regularly deploy when making food selections, but they go like this:

In addition to these axioms, I have vastly reduced the amount of grains I eat and I’ve effectively eliminated dairy. All of this being the case, a trip to the grocery store becomes weird. I walk into the produce section, and don’t venture anywhere else (unless I need toothpaste or a light bulb).

I am often aware of the huge expanse of store and products therein that I no longer pay attention to. It feels like a vast, mysterious waste, a mythical no-man’s land that I cannot enter…”here be dragons…”

Anyway,  I was walking back to the office from the nearby Safeway after having obtained some food when I came upon this, on the side of the building: 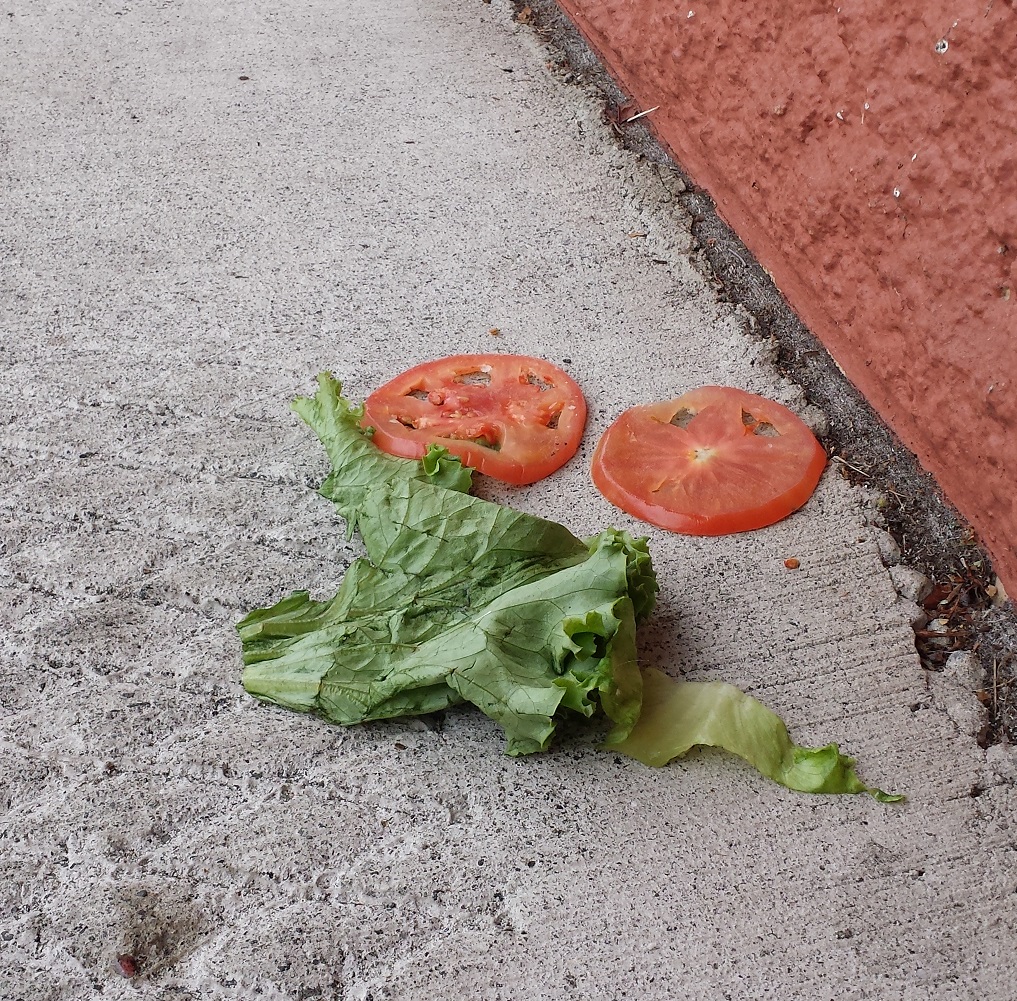 I walked past this, only glancing at it with derision reserved for litter – especially litter plopped right on the sidewalk. But then I realized more fully what I had seen and actually turned back and took the picture.

Based on the un-natural uniformity of the tomatoes and the slight phosphorescent coloring of the lettuce, I deduced that this flotsam was commercially grown and based on the proximity to Safeway, likely had been discharged from a deli-sandwich purchased there.

The fact that someone just dropped this right where other people walk was bothersome enough…the wastefulness and complete lack of consideration was aggravating, but as I looked at it longer, it took on a tragic, artistic quality. It had meaning.

Someone had purchased a sandwich and deliberately, with prejudice and full intent, discarded the only two ingredients which were actually food. Yes, a case can be made that the bread in this theoretical sandwich qualifies as food…and one could also make the case that if the tomato and lettuce were GMO or soaked in pesticides, etc., that they were NOT. But even accounting for those two caveats – one is still left with the conclusion: The only parts of this person’s meal which could be classified as naturally occurring food were the only parts that the person discarded.

I have been afraid of becoming a foodie for some time now, and this episode increases my fear. I was really bothered by this! What’s happening to me? I don’t want to be a foodie! In fact to the extent I might already be, I’m not a very good one. I still cheat with cookies and ice cream and chips, even a soda now and again. I have serious questions about the validity of GMO health risks and there are other issues which take the shine off the organic apple of my foodie-ness.

But this really pissed me off and made me sad. It was just so blatant. So clear cut.

(It was like the notorious Planned Parenthood videos: you can’t escape it even if you want to: body parts are harvested from dead children and money changes hands…)

Obviously this is on an altogether different plane of “wrong” but it occupies the same plane of un-deniability: there are people who have altogether lost their appetite for food and instead ingest only manufactured items.

Am I nuts? Am I just following some kind of reverse course of “maturing” into a liberal?

That can’t be it: I’m more outraged at the abortion industry than I ever was, I have zero confidence in our national government and pop-culture grows more inane, confusing and grotesque with every passing day.

No. There is something real going on here. We’re losing people from every point on the spectrum.

I’m not talking about inside-the-ball-park human failings. Nobody can live perfectly…but standing there looking as this discarded food, remembering those awful videos…I can’t escape the realization that many…maybe most… have stopped trying to be better, stopped trying to think. They’re being sucked whole into this post-modern, consumeristic, simplistic, self-centered, self-destructive, self-indulgent and unsustainable vortex of an existence, and they don’t care – OR – they are so completely ignorant that to point it out creates the impression that YOU are the crazy one…YOU’RE the outsider now – the “foodie”, the “environmentalist” the “hippie” the “nut case”…”the right wing whacko” ”delusional”, “hater” “bleeding heart liberal”. You name it.

So-called common sense is increasingly derided from one political pole or the other by whichever pole finds said “sense” inconvenient for their platform. But I’m afraid most people will ignore fetal organ harvesting and embrace childhood diabetic obesity not because of a political ideal – but because they just don’t care anymore.

Woe to those who call evil good and good evil, who put darkness for light and light for darkness, who put bitter for sweet and sweet for bitter.- Isaiah 5:20

5 thoughts on “Hold the lettuce…hold the tomato…”