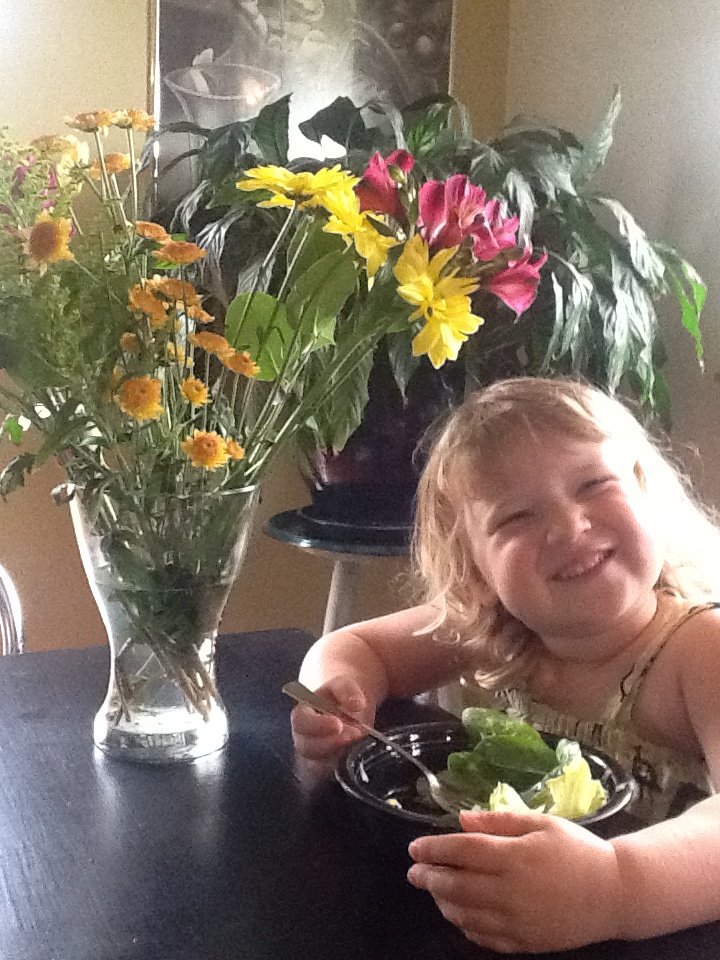 This is Ashlynn. She is 4 years old and spends a couple of days a week with my wife while her awesome parents teach other kids at school.

Ashlynn and I were enjoying a spinach/radish salad (with the addition of some store-bought lettuce) which we had just picked from the garden.

I head into the office later on Thursday mornings because most Thursday nights are long ones..sometimes not over until 10:00PM or later. So I was still home when Ashlynn arrived at our house, full of energy and ready for…something…anything really.

I had already read through Part IV of the Liturgy by the time she arrived, and was planning on sitting here at the computer to reflect on what I had read. But Ashlynn would have none of it. I looked at my wife who was spooling up her own energy in anticipation of chasing Ashlynn throughout the day…I looked at the clock…I looked at this short person dangling at the ends of my arms, using me as playground equipment, looked at the computer which beckoned me…and then I thought of the garden.

We didn’t spend a lot of time out there. 4 year old attention spans (even LONG ones like Ashlynn’s) are still only slightly longer than my Pole Vaulting High Light Reel (see the next to last post). So we pretty quickly picked what was pickable this early in the season…talked about the garden, washed up our harvest and made a meal. In that 30 minutes or so, I was carried into the Liturgy, and saw things I may not have otherwise seen because Ashy was with me:

–  The wonder of water. Droplets forming on leaves and sneaking into the holes in Ashy’s Crocks lead to commentary that refocused me on this amazing substance. The Brendan Liturgy casts “water” as a character in the story…looking through Ashy’s eyes, I could see it.

Water is the the mysterious and dangerous stranger that might at once serve us or destroy us. We need its power and life giving force…but it cares little about us as individuals. It is no respecter of persons. It will wash away a village, carry a barge filled with soldiers, or bring life to the desert…it just goes where it goes. “Gladriel” from LOTR comes to mind, as well as “Ransom” from “That Hideous Strength” or any number of Greek gods…they just sort of do what they do, and you hope they don’t notice you as ride along on their power.

It’s the universal solvent, after all. Given enough time, it can reduce pretty much any substance to it’s lowest, molecular denominator: it destroys steel, granite, concrete and glass. It shapes mountain ranges and coastlines. Yet, the presence of liquid water in our universe is so rare as to be miraculous, and serve as the primary required ingredient for life.

Ashy felt it as the cold invading force assaulting her feet…and just seconds later as the mesmerizing jewel adorning the slender neck of an onion sprout.

– Adventure lies in the Outdoors. Don’t get me wrong…I’m thankful to have a house. There are many aspects of the INDOORS that appeal to me. But I was reminded today that when you’re three feet tall, the outside world becomes disproportionately larger. I’m mean…it can be big and scary and dangerous to a full grown man on most days, but when you’re Hobbit sized, it takes on a whole new level of intrigue, hardship and possibility. Slopes, steps and other obstacles emerge at every turn…roadblocks to one’s progress: grown-ups get used to the half dozen paces down the path to the spinach patch; Ashy has to navigate slippery patches of grass, large stones and obstacles she can’t see over. She’s not afraid or anything…it just makes the walk different: longer, slower and less…routine. You have to think about what’s in front of you. Indoors, you can walk from your bed to the bathroom and back in pitch darkness and not even think about it. But you can’t take any path for granted when you’re OUTdoors…and especially when your Hobbit-sized…because paths change with time, with the weather, with use and with your own growth.

Discovery lies at every turn. I understand why some people are drawn to working with kids of this age. They are constantly discovering new stuff…stuff that WE feel perfectly equipped to explain. We are not rendered “stupid” by being asked questions like “What’s THAT!?” nearly as often as when we’re asked, “Why didn’t you check the oil in the car YESTERDAY?” or “Johnson, where’s that report!?” It’s fun to be knowledgeable and serve as guide to someone else’s adventure.

I still couldn’t do it everyday…and certainly not with more than one or two Hobbits at a time. THAT would be bad for everyone.

Anyway: Ashy found just about everything exciting and new. She is no stranger to new stuff, and no coward when it comes to the adventure of the outdoors (her family lived in Africa for a year after all). But she is still only 4.

Learning what the leaves of “Pin-ach” and “Yadishes” look like was all-consuming…for about 45 seconds until the onions caught her eye. The shadows cast by Hazelnut trees were next, followed by an extensive discussion of the concept of “weeds”.

“I HATE weeds!”, she said with accompanying “angry” face and arms crossed over her chest.

I caught myself preparing to go into an ill-advised and ultimately pointless speech about “weeds” being an arbitrary distinction based solely on what the more complex species in a given ecosystem finds useful (…of course I was going to use hand motions and a rhyming scheme to illustrate…I’m not a COMPLETE derp.) But what stopped me more than even my own sense of foolishness was honor and respect for Ashy’s view. Certainly some of it she acquired while working with her parents in her own yard, and in the garden patch her family had in Malawi…but it ran deeper than that:

Ashy and her opinion (wherever it came from) were part of the “outdoors” too. She has a role to play in it all just like the rest of us, just like the shadow of the Hazelnut tree and just like the yadish patch. Sure – it might be worth sharing some of what I’ve learned about finding your place in  The Creation…but probably not until I’m actually asked, and in the meantime, the best “lesson” might simply be to live out my OWN place in it all to the best of my ability.

Get outside and find your own place in the story:

“The whole of Earth and Heaven waits to see the Sons of Courage arise…The travail of redemption chorused, Christ’s resurrection brings us here, the Bird of Heaven still awaiting, the Paraclete our ship to steer…”