We were exhausted after the first clinic day, but spirits were high as we sat around the dinner table last night. The EMP building it is equipped with solar panels and a battery storage system which means it’s the only building around for miles with electric light, and we sat beneath it, sharing our high and low points from the day.

Showers were had in the outdoor stalls. Davidson the cook heated water over a fire and filled plastic basins for those who wanted hot “showers”. Pretty much everyone faded to their beds completely spent. It was a good thing, because we had to be on the road by 6:30am in order to make the second clinic site.

We had to get an early start because we were traveling to a particularly remote village over a very bad road, and we needed to open the clinic by 9:00am because we needed to leave by 4:00pm so as not to get caught on the road in the dark….it was that bad.

Two hours, of rugged up and down, over ravines, inches from the edge, wooden plank bridges, and steep slopes. On two occasions, the grades coming up were so steep that the flatbed had to back up multiple times and make a run at it.

Now, I’m no off-roading expert, but I’m not a complete novice either and this was some of the roughest vehicle travel I’ve ever experienced. These roads were so bad that in the rainy season, they are essentially impassable.

By the time we finally arrived at the village of Matakenya, I was already exhausted.

We reduced the Malaria testing stations from two to one. Both Lori and Linda were very kind and offered to help or give me a break whenever I needed it. There were several times that I needed Linda to step in and open a second “station” because there were a lot more tests this day. We also had 10 times as many positive results. Becky attributes this to the fact that this community has never had a mobile clinic, and being more isolated than the first, deals with much more chronic Malaria.

The child with a 105.6 F. Temp who did NOT have Malaria was disturbing.

The 3 year old who was so sick with Malaria he was panting like a dog and couldn’t hold his own head up.

The entire family of four who needed to be tested.

The man with a birth defect so severe you could barley recognize his face as human from one side.

The number of people who had never seen a bathroom scale before and tried to sit on it, put their hands on it or pick it up.

The hundred people at the gate of the school who had to be turned away.

The dozens of people who rushed the Malaria testing station at the end thinking that I had something to offer them.

It was another long day.

We had to get on the road and did so on schedule, and it was a good thing because the lead rig in our caravan blew out a front tire about 45 minutes into the return trip.

It took nearly an hour between finding a working jack, repositioning the car so we could get the wheel off, re inflating the spare, etc. to get moving again. 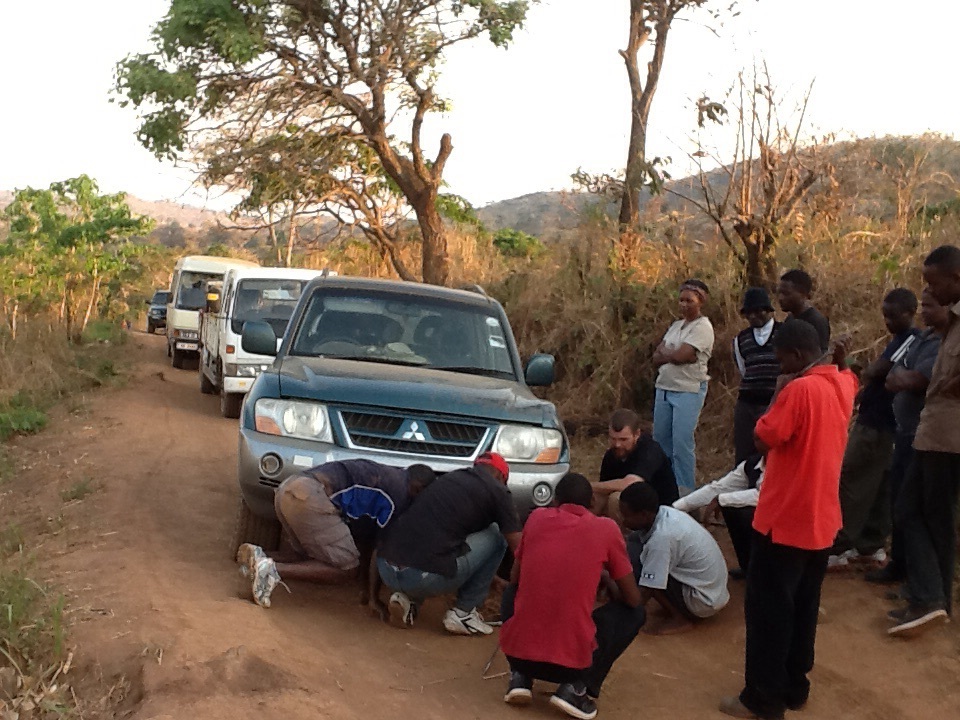 But perhaps the most humbling moment of the day was when Sam revealed to us that just a few weeks ago, 4 of the barely passable bridges we had creaked over to get there ( and back) did not exist at all.

In a joint effort of the government and the villages, the bridges were built specifically to get our team through to Matakenya.

Suzio is the man, and I promised to tell his wife that too. So, Mrs. Suzio, you married the man!

A well earned late dinner back in Gusu, another surreal night lying under the Coral Tree and (no lie) falling asleep listening to the drums in the village and missing Brenda as I gazed up at a ruby colored moon.