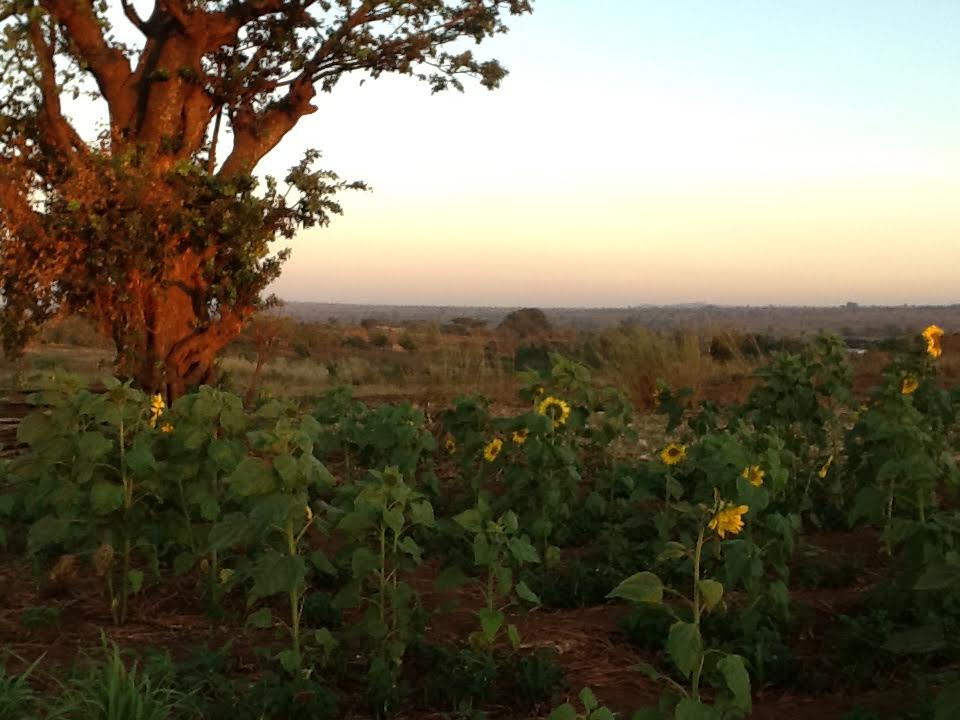 By the next morning I was very worried about our latest team mate who had taken ill. She was
demonstrably harder hit than the rest of us, to the point that after running the Malaria test on her, Becky took the further step of getting her to a nearby private clinic for more comprehensive blood test.
We were packed up and on the road early Saturday morning to make the drive out to Gusu for the final, and likely largest Clinic of our trip. Our comrade suited up and came with us, (not just because she’s tough and won’t quit!) but because Becky needed to keep her under observation.
As soon as we arrived, she was placed on a pile of mattresses in the corner of the E.M.P. building. She was not doing well at all. By mid-morning, as teams were working to complete a fencing project and the clinic was fully underway, our team mate was receiving IV fluids and antibiotics. Becky snared one of the Clinical Officers (an MD she has known and trusted for years) to comedown to the E.M.P. and take a look at the patient.
At this point, she had symptoms concerning enough that a plan began to develop which involved getting her back to the ABC clinic in Lilongwe to perform a cat scan, and if the results indicated what everyone was afraid of, then arrangements would be made to evacuate her to South Africa for life saving surgery.
This is where the fear begins.
Both Dave, Becky and a third team member went with my friend on the bus back to Lilongwe (the absolute right decision for every reason imaginable) but it did result in a strange situation:
It was surreal. There were literally a thousand anxious people lined up outside the Gusu school block waiting to see a clinician, an estimated additional three thousand people on the grounds to participate in the Jidi soccer tournament. and the remnant of our team in the middle of it all, with no communication or transportation.
A return trip to Lonely.
Thank God Peter Tang was there. This was his fifth trip to Malawi and he is an E3 Board member, so he knows his way around. None-the-less, as I dashed back and froth from the E.M.P. Building to the clinic site throughout the day, covering this post and that post (we were severely short-staffed now) I could not calm myself. I could not let go of fear and anxiety for my sick team-mate. I was distracted, anxious and still feeling sick myself.
I prayed. I sought a few moments of quiet and stillness. I reasoned with myself..but nothing seemed to touch the acrid sponge of fear swelling in my stomach and soaking up my strength.
My thoughts bounced between my friend, her husband back home, the other members of our team, and embarrassingly: myself. Why did I feel a haunting sense of responsibility for this? Why did I feel like there were eyes on ME? No one on the team was looking to me…not even close.
Upon reflection, at least PART of it has to do with being a leader. The Romans 8 spiritual gift of leadership carries with it shadows (like all spiritual gifts do) and one of those shadows is feeling responsible for…well…for everything. This combined with arrogance can create a tyrant. This combined with fear creates a bureaucrat.
I had become a bureaucrat.
I was frozen. Maintaining a certain level of exterior motion, but absolutely rigid inside. This lasted all day. I was called upon to hand out the awards to the wining teams in the soccer tournament – and while this should have been a highly notable experience for many reasons, it was just a blur.
Finally, word came to Mala via a text message: our friend’s condition was treatable with medicine, right here in Malawi and they would be staying in Lilongwe that night to continue her treatment.
“Phew!” said my brain.
My heart and soul were silent and unmoved.  Now habituated to this place of anxiety, they would not let go their grip despite my brain’s re-assuring.
The team gathered for diner that night under failing lights. There was insufficient sun light that day to charge the batteries.
Then the rain came again.
As I lay in the tent that night, my stomach churning, the drips beginning to form on the inside of the tent and the sound not of villagers singing, but of dogs howling for a lullaby – I was grateful that my friend would be fine…but as God has been showing me lately, it’s time to move beyond gratitude. I still don’t know how to do that.
By 4:00 am, the pain in my stomach, and the number of leaks in the tent were enough that I moved into the E.M.P. and wrapped myself in a blanket, sitting on the mattress where my friend had languished the day before. I tried to remember her suffering. I tried to remember every face of every villager I had seen over the last two weeks – people with so much less than me, who still found joy. I prayed for my wife, struggling at home with her own pain, I thanked God for Robyn who had been an absolute gift on this trip…for Dave and Becky and the rest of my team…but I was still trapped in my own nauseated, cold and Lonely town.
As the anxiety overtook me, and spilled out in quiet sobs, the only prayer which brought anything like relief was: “Father, not my will but your’s be done…Father, not my will but your’s be done…Father, not my will but your’s be done…Father, not my will…