Part I of the Brendan Liturgy Cont…

“Think of your spiritual journey life as a sea crossing…draw an image to represent your current position, and think about why you are where you are…” 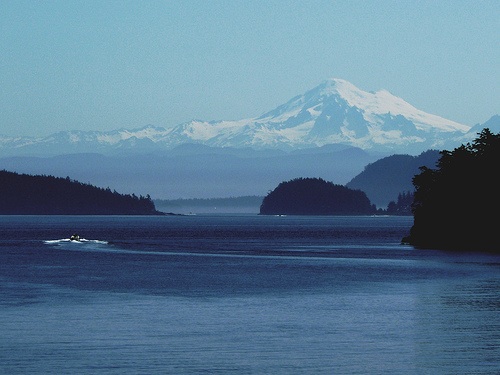 I got a pretty clear image right away. I tried drawing it, but with my limited art skills, it just confused the issue:

ME: “See the picture I drew to illustrate my spiritual journey?!”

YOU:  AH! Okay! I see it. Phew! I thought it was a badger with a chainsaw wearing clown shoes! Hahahaha! Silly me! I was wondering how a murderous clown-badger related to your spiritual life!”

So, the lovely picture (above) which I unstuck from the web is the best I could do. I chose this picture for several reasons:

It represents the beauty and unique characteristics of Puget Sound, the body of water with which I am most FAMILIAR. It shows the proximity of Puget Sound to the Cascade Mountains (Mt. Rainier or “Tahoma” in the background).

It represents the enclosed nature of the Sound: it is only a few miles wide, and much narrower in most places.

The Sound is referred to here as “inland waterways” to distinguish it from the nearby Pacific Ocean with it’s enormous waves, hurricane force winds pronounced tides and vicious currents. In comparison, Puget Sound is placid.

It is labyrinth-like. The winding coastlines, islands, inlets and bays conspire to create a difficult to navigate maze. One is NEVER out of sight of land. And while you may not be sure you’re looking at Hyde Point, Gibson Point or Anderson Island, you know you can turn around and see downtown Tacoma.

Sure, you can drown in the freezing salt water here just as quickly as you could in the middle of the Pacific. And while the weather is not as potent as the open ocean, those of us who have sailed these waters know that they are just as likely to reach out and extract respect from a sailor with as much force as any other.

But still…you are always contained. Even at it’s widest point at Admiralty Inlet…one is contained. There are edges, borders, fringes of trees mark the horizon. You can still distinguish the Douglas Firs from the Western Hemlocks, you can see the brown patches of Madrone trees stand out against the dark green, recognize the distinct silhouette of Mount Baker, Mount Shuksan and Hurricane Ridge.

In a word: Familiar.

As boys – it was a daily lark to launch our small boats into the waters of Saratoga Passage and spend chilly November mornings salmon fishing. We could not yet drive a car – but we could navigate these waters alone. Only occasionally did the thought occur to us that just over the horizon to our West, on the other side of Whidbey Island was Admiralty Head, and just beyond: The Straight of Juan De Fuca, which funneled the power of the Pacific Ocean Wilderness into our little “inland waterways”. To put out into The Straight  was to feel “swell” like NOTHING you ever felt in Port Susan, or Penn Cove…

To a prairie kid – the relative power of a Puget Sound storm while bobbing around in a 12 foot open skiff might feel apocalyptic. But to this Puget Sound kid, the boundless sky and heaving waves of the open ocean feel the same.

Cove and inlet, shore and bay, lighthouse, markers show me the way.

But open water, ocean swell, boundless vista who can tell,

Which way is home which way to hell?

Christ of the Mysteries, can I trust you on the sea?