“Brendan returned to his earlier task of the founding of monastaries, schools for the Gospel, support for the faithful. Still, he would follow the flight of the Wild Goose, the call of the Spirit to seek God’s adventures…” 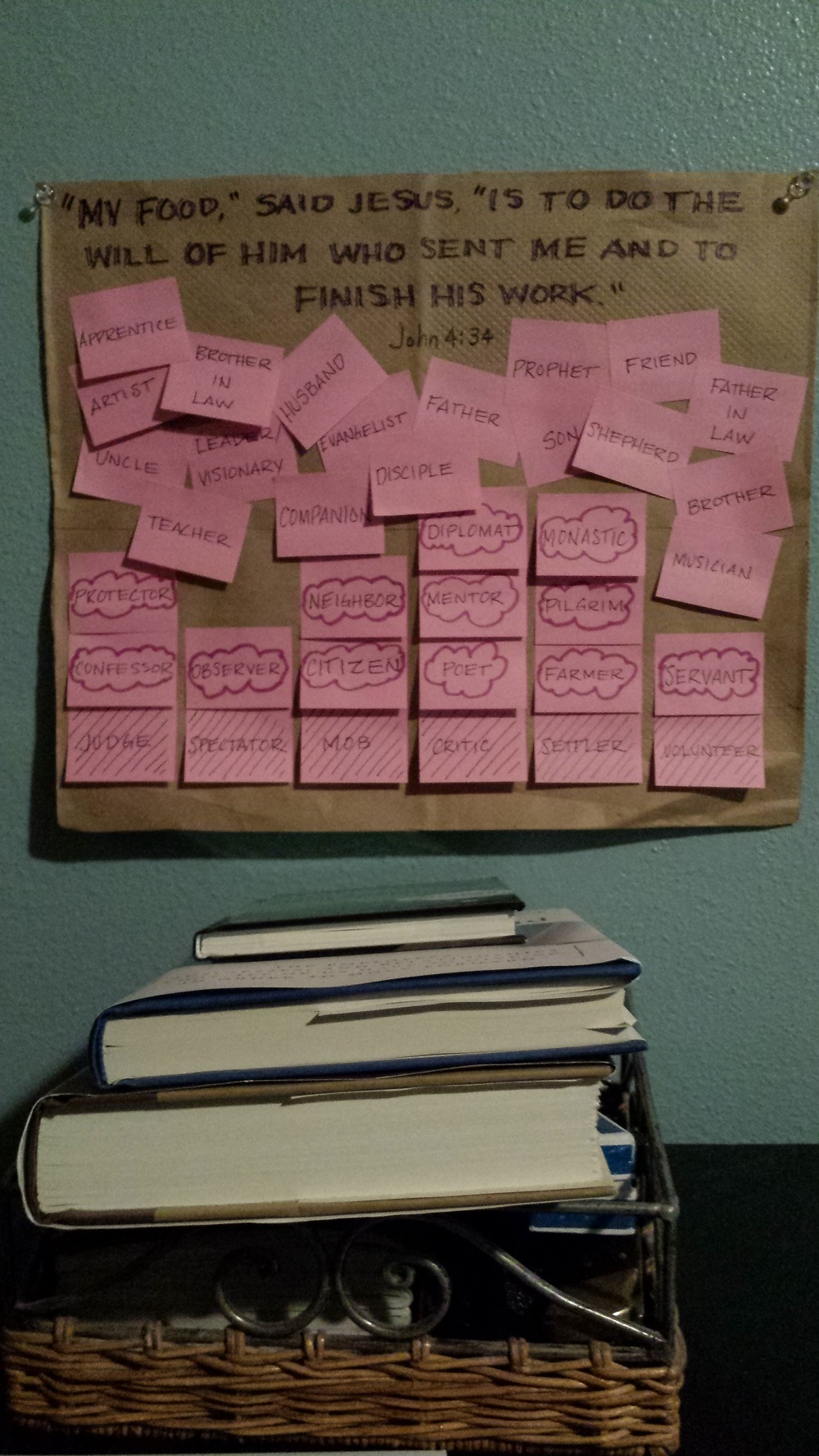 The activities and text of the workbook portion in the Liturgy is what really grabbed my imagination in this section. Brendan’s journey had taken 10 years, and then he “settled down” to the work which truly endures to this day: the establishment of monastic houses.

“It had been a long apprenticeship. Great works often have deep roots.”

The workbook intructs us to write down all of our roles and responsibilities on a series of sticky notes then order them according to the amount of resources they draw. Then re-order them according to how much of a burden, or a blessing they are. Finally order as you feel they should be in terms of Godly priority. The scripture associated with this exercise is John 4:34 “My food is to do the will of Him who sent me and to complete His work.” We are instructed to write this on a paper plate along with God’s priorities for us in that moment; the “work” He has for us to complete.

I adapted and blended the two exercises a little bit.

As I began to write down the “roles” I play in life, I began to notice that some of them were Transcendent. They are not roles that one can pick up or put down again. Some of them are based on biology, but all of the transcendent roles are relational. They either relate to another human, or to God. Some have to do with “gifting”: your’re either equipped and resourced to play the role of “musician” or you or not, there is no real choice in the matter. In all these “Transcendent Roles”, one can certainly choose to deny them. One can ignore them, abuse them or suppress them, but it does not alter the fact of their existence.

Then I noticed another category of roles: “Common Roles”. I define these by our ability to choose them or not. They may be rooted in a Transcendent Role, but we have a high degree of authority in choosing whether they manifest themselves at all. In other words, a “Transcendent Role” will show itself (functionally or DYSfunctionally) whether I want it to or not. It exists apart from my will. A “Common Role” will show itself only if I choose it. In a sense…I can create a Common Role for myself.

I posted my “work sheet” above my nightstand as a daily reminder that I must choose the work God has placed before me. While true apprenticeship is never over (see my last post) we must also realize that a time comes when we begin to act on what we have learned.

I have often mistaken these calls to action as the construction of a program, a system, an organization. Sometimes that is the case. But more often, the work which God has called me to, the “will of Him who sent me” has to do with the roles I play, with who I am…not with the things I do.