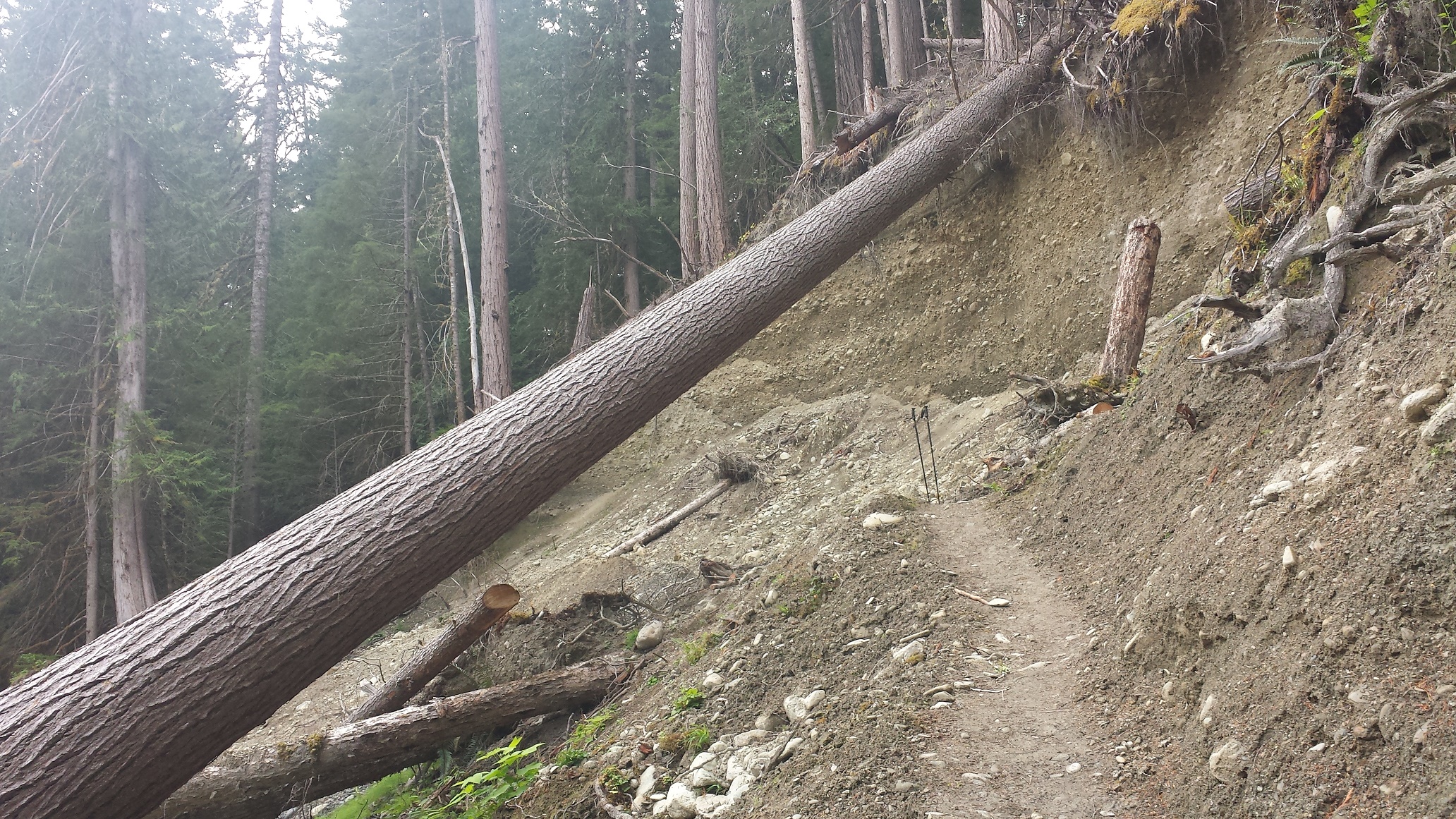 While having coffee and wondering why I am so anxiously obsessing about rain or not-rain, I fantasized about the human scale experience of change. I say to myself aloud, “it WILL rain!” (‘cause it WILL) in an effort to snap myself out of this anxious little pity party.

The river will rise…

I contemplate the scene across the river right in front of me: Douglas Firs and Hemlocks that have stood for centuries, Alder and Western Red Cedar that were here since before I was born…but they have changed. They will die and become one of the bleached hulks scattered upon the gravel bar down river. Their carbon atoms will be wrenched out by heat and water and bacteria. Those atoms will find their way to the sea – they might collide with carbon atoms that once comprised Tom or Chere Hazen’s bodies. They will become part of the food chain, and in time, some countless years from now, they will be deposited back here in the form of a gasping, exhausted Chinook salmon. After that, a young tree root will find it’s way to that spot in the soil where that carbon atom lies waiting – to build another tree.

But will the river be here? The solid rock shore across the river shows obvious signs of wear. It is changing too. I imagine a young boy, setting up a camera right here, anchoring it to the bedrock, making it “immovable”. Each year, on the same day, for his entire life, he returns and snaps a single picture. By the time he is a full grown man, he can review the pictures and notice the trees coming and going, the foliage changing, even the water levels varying. But it is only from the point of view of many such lifetimes laid end to end that one could begin to perceive the solid rock at the shore changing as well. The foundations of the Earth are shaking.

In her orbit, she is exposed to wildly varying conditions. As our sun orbits the Galactic Axis, untold circumstances come and go, all of which impact our little ball of rock in ways unknown. And our pitiful little galaxy, wandering amongst the others like a carbon atom in  a vast sea…well, who knows what changes it faces, what forces will be deployed.

Yes, it will rain.

I just re-read *day three from last time. Robyn, I’m so sorry. I am very proud of you and I wish I were more like you.

*My true heart can see the good and encourageable things in others…I see them all the time. But I either keep quiet – or they are replaced by a cruel judgement. My true heart is more like Robyn’s…encouraging and brave.

The following words (in ALL CAPS) were essentially shouted during an emotional event I can only describe as a combination of a panic attack and a tantrum. It occurred in my tent after 5 hours of non-stop rain. Frankly, part of the turmoil was because I was shocked by the intensity of it. I still do not fully understand this event. In a brief moment of clarity, I had the presence of mind to write down these outbursts with the hope of understanding it all later.

Those who have read “The Book of the Dun Cow” will recognize the final exclamation as the favored cry of Mundo Cani, a character defined by his never ending sorrow and misery. After this experience – I relate to his character even more.

IT ALWAYS GETS IN! IT’S EVERYWHERE! IT’S GETTING IN AGAIN! I’M WET, THE SLEEPING BAG IS WET! TEARS, SWEAT, SNOT – IT’S IN ME!

OH, GOD HAVE MERCY, I WANT OUT NOW!

THIS IS MY SPOTLESS LAMB. I CAN NEVER GO BACK TO BEFORE THIS!

I don’t have words to express the insanity I felt. I just can’t get at the intensity of it. A panic attack? A tantrum? It felt like a 3 year old’s tantrum looks. I spiraled from anxiety to shame to outrage, to doubt, to anger to demand-making and back to anxiety. I had done well with rain up until then – hiking through it – setting up camp – but once in the tent, I felt “trapped”. It just came on me.

Then it largely left as quickly as it had come when…when….I don’t know…I had no choice but to deal with it. I had to eat. I had to go to the bathroom…I was going to get wet and it could not be stopped. I have been mildly anxious and sullen for the rest of the night – pleading for sun in the morning, marking the sound of every drop of rain on the tent like being inside a badly tuned drum.

Later I recognized the reference to a “spotless lamb” and “not going back to before this”, as a nearly sub-conscious acknowledgment that I was being fully open with God. This was the depth of who I was at that moment – I was holding nothing back from Him.