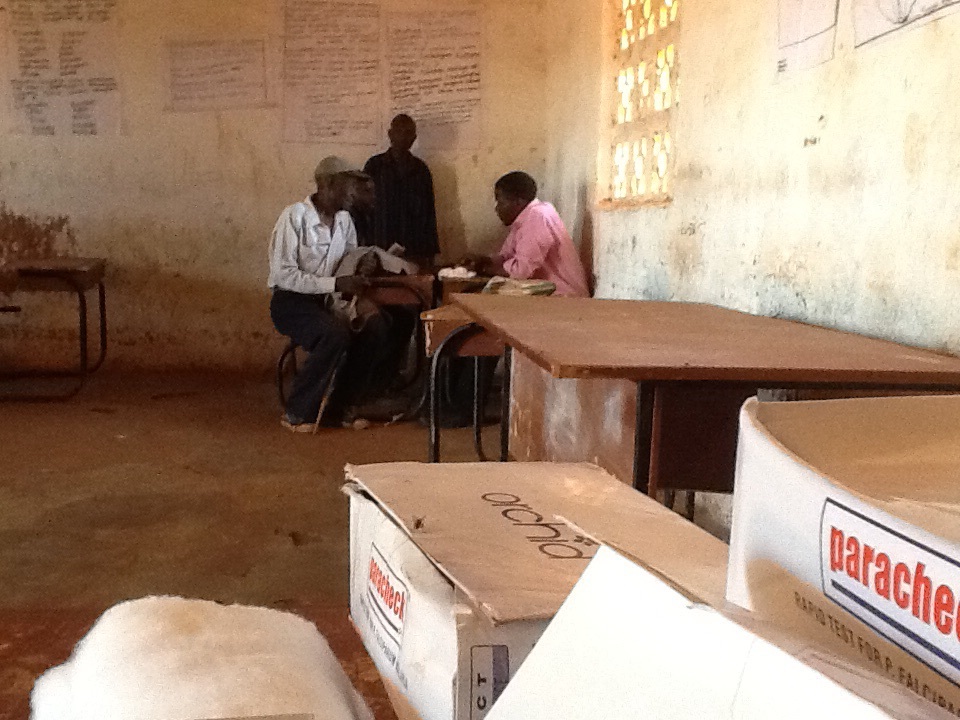 The view from my terrifying little corner of the clinic…

Another hour of driving over very rough dirt roads takes us deeper in the the “Warm Heart of Africa”. As I look at the short caravan in front of us (a car carrying the clinical officers and a flat bed truck with most of our gear and medicines) I’m reminded of National Geographic specials. I can hear the British narrator doing a voice-over in my head as the dust flies off the road in front of us: “no rain has fallen here since April last. The local people are beginning to run out of their stores of maize as they await the first rains of the season…”

It’s really that stereotypical: winding, dusty roads, women in colorful zitinge carrying inconceivably huge loads on their heads, almost everyone waves at us. Robyn literally hurt her back yesterday waving so madly.

It hasn’t slowed her down today at all.

As we pull into the village which will be hosting its first-ever mobile medical clinic, the children rush the vehicles by the hundreds. Most wearing their maroon colored school uniforms, all bear foot, and all crying out in their loudest voices, “Mnzungu! Mnzungu!”

Brenda, Kellie and others spoke of this when they travelled here…but nothing really prepares you for the experience.

It’s worth noting that kids are kids everywhere: the little ones rush in and want to touch you and play games. The older boys stand farther back and appear very cool and detached. The older girls cluster together, point and giggle.

We unloaded the truck, wading through a sea of cuteness waste deep. The pharmacy was the first area to be set up, and we non-medical volunteers loitered around for a bit as the smart people deployed the plan:

One room of a school block is set up as Triage where Chichewa-speaking volunteers fill out a card for each patient with their name, age, and reason for the visit. The patient’s temperature, weight and blood pressure are then taken by members of our team. Robyn was weighing people and taking temps.

The patients cue up again at a second classroom to see a Clinical Officer (mostly young Malawian doctor-volunteers, but also Becky and other medical professional volunteers like Mark Holland)

The patient gets a brief consult/exam and when called for by the C.O., are sent over to my little school desk in the corner:

I’m the guy with the sharp things.

The guy who makes babies cry.

I volunteered to give Rapid Malaria Tests.

If a patient exhibits certain symptoms and meets certain criterion, the C.O. will send them to me (or Lori…the other fool who volunteered for this gig) and I poke their finger with a teeny tiny “lancet” (emphasis on lance). I then mercilessly squeeze their finger until I get a full drop of blood dangling freely, capture that drop on a small loop, transfer that drop to a patch on the test kit, deposit four drops of an activator fluid into another portion of the test, and then wait to read the result (positive or negative for Malaria) sitting in awkward silence for about 5 minutes as the sometimes screaming child and anxious parent stare at me.

Yes, I’m over-dramatizing it a bit for the sake of blog-worthiness…but really not much:

Did I mention that I have never done anything like this before? Ever.

I mean, it’s no one’s fault…Becky showed us how to do it perfectly. But how many times in life do you find yourself thinking, ” hmmmm…exactly how hard do I thrust this sharp object into the child’s flesh?”

Also, did I mention that these children are not only sick, but have only seen a handful of white people in their lives; children with whom I cannot communicate or offer meaningful comfort and who scream and look at me with actual horror, squirm in their mother’s arms and try to get away as I try to stick them a SECOND time because my first attempt was too tentative?

My teeth hurt at the end of the day from grinding them non-stop.

It’s not Malaria season here right now, so the tests were given largely to eliminate Malaria as a possibility. Out of the 50 or so tests given, there were only two positives. Both children under 5, lethargic, feverish and dehydrated.

These are these things I know after Clinic Day One:

1) I am not a phlebotomist. I never will be. This is one career mistake I did not make. Though my technique did improve a little bit over the day (less double sticks, blood running down the hands and other vampirism images) I never felt better about it. I didn’t get used to it. My confidence never increased, my stomach never stopped churning, my hands never stopped shaking and my soul never settled.

2) Kimmy Epperson, who performed these tests countless times in past Mobile Clinics, is now my hero.

3) God put a question in my heart during my solo hike over a month ago (see older posts: El Camino De Quinalt Part Duex): “Dan, would you rather feel loved or be loved?”

I know the answer now that I have the memory of the first little girl I tested.

She did not flinch when I first poked her finger. She never took her eyes off me as I awkwardly twisted her finger, got her blood on my gloves, squeezed her finger harder, tried again and finally realized she had stopped bleeding and I would have to poke her finger again. Tears were welling up in her eyes as I picked up the lancet a second time, but she never looked away. She didn’t flinch when my trembling hands stabbed her again. She didn’t look away as I struggled to get that damn drop of blood on that damn loop, and I audibly sighed when I finally succeed. She didn’t look away as my shaking hand, like a drunk trying to fit his key into the car ignition, smeared her blood all over the test kit.

I have no way of knowing what she did or did not understand regarding what I was doing to her or why. But the fact is: She was being loved, though she did not feel loved.

Her test was negative.