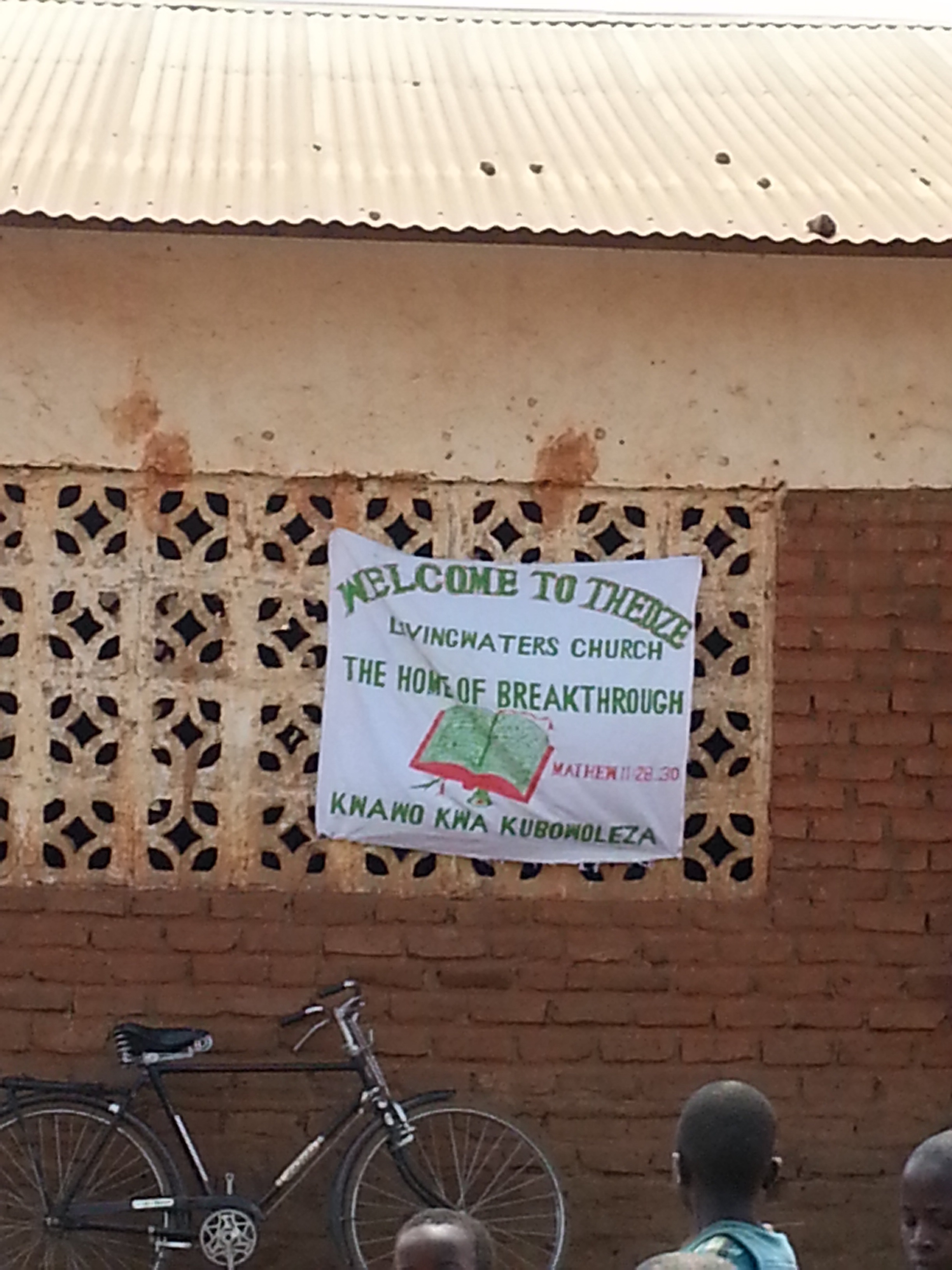 It was a bit surreal, looking at our team milling around the garden with the chickens, stirring up the red dust and wandering in and out of the composting toilets…each of us dressed in our Sunday best.

In Malawi, you dress up for church…even church under a tin roof with concrete benches.

We arrived at Chibanzi Presbyterian Church where arrangements had been made for us to visit. But as David, our leader says, “T.I.A….This is Africa” and things change.

Almost no one was at church that day…and so a couple of phone calls later, we were back on the bus heading for a small Pentecostal church in the nearby village of Thedze which, as it turns out, had been asking our team to visit for sometime but we were already committed to the other church.

We experienced the now familiar greeting as we pulled into the village: a wave of screaming children crashed against the bus, shouting, clapping and smiling. As we pulled to a stop, we could hear the amazing sound of singing coming from the open classroom block where the church meets, their white and green banner hanging on the wall declaring, “Living Waters Church”.

As the 50 or so people inside continued to sing and clap, we were ushered in and I was lead to the “pastor’s seat” (I don’t know if it has a name, but it was the only wooden, padded chair complete with lovely blue doilies in a room otherwise filled with stained and cracked plastic lawn chairs). Frankly, it was little uncomfortable. It felt like some kind of a throne.

The singing continued, so beautiful, so exuberant. No instruments other than one djembe which supports the hand clapping. You just don’t hear singing like this where I come from.

The village children crowded around the front door and began to spill into the room despite the efforts of one of the elders to keep them out. Others ran around the other side of the building and peered in the ventilation openings, giggling and pointing at the the Mngunzu sitting inside.

There were some announcements, a couple more songs and an offering (performed in classic Pentecostal style with people walking up front to drop their offering in a plastic basket for all to see). This all took about half an hour, and to their credit, Dave and Peter only fell asleep once that I noticed…

Suddenly, Sam was on his feet, gesturing for me to come up front with him.

It hadn’t been perfectly clear to me up until that moment that I would be giving the sermon today. I wasn’t too surprised. Both Rick and Dave had told me to be prepared – visiting pastors are often called on to teach – but with the change in venue, etc., it was a bit murky.

At Dave’s request, I had put together a talk about “church without walls”, taking the life of the church beyond the building and the Sunday meetings, a topic Dave felt was important for the African church to hear.

As Sam introduced me, he ushered in as many of the kids that would fit. So we were surrounded by 50 little people, sitting at out feet, smiling broadly and enjoying they did not know what…

I managed to pull off a joke or two (always a little dangerous when being translated) and the congregation was attentive and generous. After we finished, one of the Elders took the “pulpit” and as best as I can tell, reviewed the the entire sermon from notes he had taken, and did so with GREAT excitement. I’m not the most sedate preacher in the world, but this guy made me look the social studies teacher from “Ferris Bueller’s Day Off” (this is a good example of a culturally dependent illustration one would want to avoid in rural Malawi, by the way).

A couple more awesome songs, including one which was sung as a sort of processional as we left, and we were escorted to the site of a new church building that was under construction on the other side of the village (a bit ironic given my topic!)
We prayed for the new building, and waded back to the bus through giggles, grins, high fives and fist bumps.

Back to Gusu to pack up, back into Lilongwe and the Pizza Inn for a post weekend celebration dinner. A strange, very western pizza chain run by East Indians. Italian inspired American food prepared by Indians in Africa…talk about an international experience.

Topped it off with some ice cream and then flopping into bed feeling like something got done.

It wasn’t until Monday that this eternally nagging thought returned to mind: “…it’s not going to stay done.”